My last post looked at the moment when Hunt and Millais criticized the unnatural, dramatic qualities of Raphael's Transfiguration, and were labelled “Pre-Raphaelite” by their fellow-students. So what brought them to look at Raphael's painting with such fresh, critical eyes?


Hunt wants us to believe that he was the main one to come up with it, even before he'd met Rossetti. His book describes (pp 82-91) in great detail how he and Millais had developed new principles of painting while locked in coffee-fuelled debate. But clearly, Hunt's opinions didn't just spring out of his own forehead, or out of a cup of coffee.
First, there is the little matter of the first volume of John Ruskin's Modern Painters, a wildly successful book, which Hunt stayed up through most of the night to read. In it, Ruskin discusses “the ideal landscape of the early religious painters of Italy”, arguing that they have a “… loving fidelity to the thing studied. The foreground plants are usually neither exaggerated nor stiffened; they do not form arches or frames or borders; their grace is unconfined, their simplicity undestroyed.” He goes on to recommend these early artists, including Raphael, as good models. “And on this their peculiar excellence I should the more earnestly insist, because it is of a kind altogether neglected by the English school.”

Similarly, Robert Benjamin Haydon, the history painter who had committed suicide in 1846, and who made it onto Rossetti and Hunt's “List of Immortals” in 1848, also insists on truth to nature. Near the beginning of the first chapter of his “Lectures on Painting and Design”, he quotes Hamlet's advice for theater, that the actor should be careful “that you o'erstep not the modesty of Nature.” He continues, applying this admonition to art students: there is no other way to learn this lesson, he wrote, but “the daily habit of looking Nature resolutely in her sweet eye, shrinking not from her piercing eye, and never neglecting, under any circumstance of perfect practice and long experience, to make his sketch even, without the control of a living and breathing model.”
Hunt and Millais had clearly learned their lesson from these prominent writers, especially Ruskin, and had begun assigning value to paintings based on their “truth to nature”. This does seem to have been their approach to the Transfiguration: one of their complaints was that the possessed boy was unrealistically portrayed. Hunt had gone so far as to read a physician's criticism of the painting, which argued that the boy was overstrained and should not have had his mouth open.
That Hunt and his friends started questioning Raphael's work while under the influence of these "truth to nature" arguments seems likely. But attempting to pin-point some moment when the Pre-Raphaelite brothers turned against Raphael is fruitless. Hunt was quick to point out that he and his friends never stopped admiring Raphael. They wanted only to reject Raphael's feeble imitators, and Raphael's later works:

“Pre-Raphaelitism is not Pre-Raphaelism. Raphael in his prime was an artist of the most independent and daring course as to conventions .... but the prodigality of his productive-ness, and his training of many assistants, compelled him to lay down rules and manners of work; and his followers, even before they were left alone, accentuated his poses into postures .... Whoever were the transgressors, the artists who thus servilely travestied this prince of painters at his prime were Raphaelites …. The name Pre-Raphaelite excludes the influence of such corrupters of perfection, even though Raphael, by reason of some of his works, be in the list, while it accepts that of his more sincere forerunners.”

It seems that many of Hunt's ideas came from Ruskin. Even this argument about the decline of Raphael's later work could have been lifted from the first volume of Modern Painters, where Ruskin wrote about "the precious and pure passages of intense feeling and heavenly light, holy and undefiled" which "sanctify with their shadeless peace the deep and noble conceptions of the early school of Italy,---of Fra Bartolomeo, Perugino, and the early mind of Raffaelle."

Posted by Clara Finley at 7:56 PM No comments: 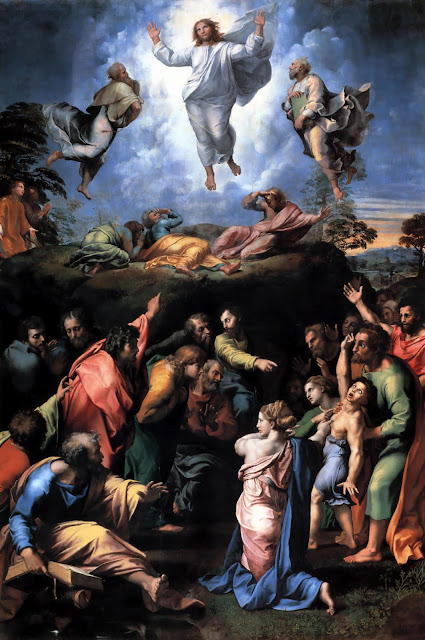 “A plant, a tree, or a flower, he will depict either with the minuteness of the pre-Raphaelite painter.”
This sentence seems to have been written sometime after the 1840s, but in fact it comes from an 18th century essay on Shakespeare. Yes, the term pre-Raphaelite is pre- Pre-Raphaelite. Before Rossetti and the rest of those Victorian artist chaps came along, the term simply referred to painters of the early Renaissance.
Common Victorian knowledge held that early Renaissance paintings suffered from being too stiff. In an encyclopedia entry from 1835 on 'chiaroscuro', (distribution of light and shade in a painting), we see a typical example of this assertion. Raphael is chosen as the turning-point: “The drawing of a piece may be perfectly correct, the colouring may be brilliant and true, and yet the whole picture remain cold and hard. This we find often in the case with the ancient painters before Raphael.”
This was more or less what the future Pre-Raphaelite artists were taught in the Royal Academy in the late 1840s. But William Holman Hunt and John Everett Millais were skeptical. Raphael's last painting, The Transfiguration (above), made them question the invincibility of the beloved Old Master. The whole effect was overly dramatic, they complained – it didn't even seem spiritual.
Holman Hunt recalled that when they relayed their new opinion to other students, “ . . . they as a reductio ad absurdam had said, 'then you are Pre-Raphaelite.'” The designation was quick work. If this account is true, it takes all of the mystery out of the origins of the term: it was slapped on them by others as soon as they had said a word against Raphael. All they could do was laughingly agree that they should accept the name.
But what put them off of Raphael – and all that followed him – in the first place? More on that in my next post.
Posted by Clara Finley at 5:33 AM No comments:


It was Morris's occasional habit to offer belated birthday greetings like this one: "Dearest Mother I havn't forgotten your birthday & the date of it, & would have written earlier in the week, but I was not keeping count of the days of the month . . . " So with this excuse, today I say happy birthday to Dickens.
Dickens was one of Morris's favorite authors, up there with Sir Walter Scott, Daniel Defoe, and Victor Hugo. When he was asked to write a list of recommended books for readers of the Pall Mall Gazette in 1886, he drew up a list of the best books he knew. In the “modern fiction” category, Dickens is one among only seven, and Morris added the note: “ . . . to my mind of the novelists of our generation Dickens is immeasurably ahead.”
Morris was a truly devoted fan. He adopted sayings from the books – "Morning, morning!" from Our Mutual Friend became a favorite greeting of his, and “what larx!” from Great Expectations dotted his letters and conversation. When he was unhappy with someone, he'd drawl out: "Bring him forard, and I'll chuck him out o'winder", after Mr F.'s aunt in Little Dorrit. When he was stuck for a way to describe a situation, he often referred back to Dickens's books and characters for archetypes. He even wooed his wife by reading aloud to her from Barnaby Rudge.
But clearly, Morris was no mere fan-boy; he was also Dickens's colleague. He and Dickens were in some sense part of the same movement: they both railed against the ugly effects of industrialism on workers. That they did so in very different ways doesn't lessen their kinship. As Arthur Compton-Rickett puts it in his 1913 book, William Morris: a study in personality, "Both men were animated by a similar spirit; each man had the same object in view....what each held dear in his inmost heart is found condensed in the pregnant words of John Ball: 'Fellowship is Heaven; lack of Fellowship is Hell.' ”
He also points out, most profoundly I feel, that Morris and Dickens both looked a little like sea-captains.
Illustration of Mr. Boffin and Mr. Wegg scanned by Philip V. Allingham to The Victorian Web.
Posted by Clara Finley at 9:50 AM No comments: 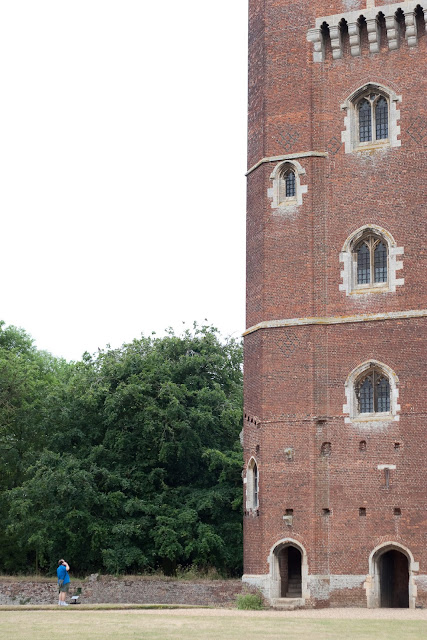 My partner's family lives in Woodhall Spa, near the romantically-named village of Tattershall. (For non-UK readers: close to Woodhall Spa, one can also find places called “Heckington” and “Spilsby". Feel free to giggle.)
Tattershall is home to a rare fifteenth-century red brick castle keep, partially restored in the early twentieth century. When I first started visiting Lincolnshire, I discovered to my horror that my partner, Simon, considered the castle to be 'not that old', and in some sense 'not a proper castle'. I suppose in a country where any given piece of farmland could have the remains of a Roman encampment, that's fair.
But it's a beautiful castle, and it wasn't long before its rosy walls brought Red House to my mind. Red House was the first house that Morris owned, and the first house that Philip Webb built as an independent architect. It's a red brick home with gothic details, and it looks like this. I couldn't help but think that either Morris or Webb had to have seen Tattershall Castle.

So, when I read in Lethaby's Philip Webb and his work that Webb had indeed visited it during a sketching tour in 1857, I was very happy. Here's one more clue to what Webb was thinking when he designed Red House. More photos after the jump!