I'm Back, and I'm in Iceland 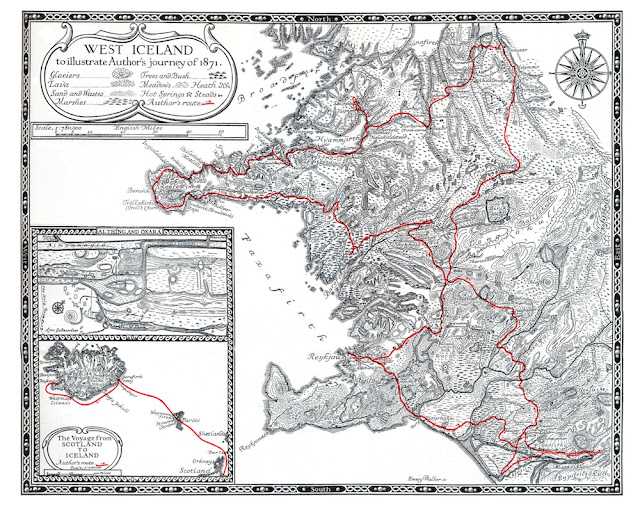 I am back, and I am visiting Iceland. The two facts are not related, but make up a coincidence more than nice enough for a blog post. Instead of arriving by cold, heaving seas, and setting foot on the very shore of Reykjavik, as Morris did in 1871 and again in 1873, I flew into Keflavik airport, stepping out into a warm, postmodern interior with faux wood flooring and skeins of yarn in the welcome gift shop. The tourism board has arranged for (admittedly great) quotes to be painted on the walls here, like 'There are many wonders in a cow's head' or 'It's a pity we don't whistle to each other, like birds. Words are misleading'. Fish and crabs are embossed on the coins instead of old men and women with flinty, xenophobic gazes. It is a good first airport impression.

I spent thousands of krona on a sandwich and a latte (almond milk! Seemingly by default!) and sit down to think about Morris's start here. He'd come for the ancient sagas and the harsh wilderness. He'd come to escape his semi-wrecked life, in which his wife was in love with his old mentor, the artist and poet Dante Gabriel Rossetti. He'd bought a new nest—Kelmscott Manor—and left those two particular birds together while he winged away to the lava wastes. He'd come to scrub his mind out with volcanic rock; to blot out his view of London with some inky mountains.

But he soon found that Iceland blotted nothing out. Far from allowing anyone to forget everything, Iceland was the blankest page, containing nothing but humans and memories:

“a piece of turf under your feet, and the sky overhead, that's all; whatever solace your life is to have here must come out of yourself or these old stories, not over hopeful themselves.”

This is obvious from my very first step outside the airport: no trees, just long bleak stretches, and free-falling views all the way out to the distant mountains. The airport, far from a dominating symbol of the 21st century, suddenly feels like tenuous stake of indoor-ness, threatened on all sides by this vast exposure. If those mountains were my destination, it would be a daunting start to my journey. I had no idea it would be this dramatic. The scale of it all puts the bravery of Morris's adventure into perspective.

But he never thought of it that way. He wasn't thinking of himself, he was observing the people around him, and imagining the people who used to live there, in the saga times. He felt by turns envious of the happy simplicity of life on an icelandic farm—haymaking and brandy and salmon and curds—and sad for how “little” everything had become from the grand, savage days of the sagas.

Nor did he feel especially sad for the poverty of the Icelanders. He'd seen working men in England, and their brutalized lives, and knew who had the better lot. This trip contributed to his social thought in new and unexpected ways, and he came away thinking “the most grinding poverty is a trifling evil compared to the inequality of classes”.

Also added to his imagination were the interiors, tiny and innocent of drapery. These simple wooden places blurred the boundaries between inside and out with their turf roofs, and sometimes with ivy growing inside too. They were all small, and humble, and almost all of them were clean. This furthered his vision for the small, classless house of the future. Later in the '80s, he would write to Thomas Coglan Horsfall, “What furniture a workman can buy should be exactly the same ... as a lord buys.”

When he left after his second Icelandic journey in 1873, he felt as if “a definite space of my life has passed away,” and vowed to himself that he would be a “really industrious man: for I do not mean to return to Iceland again if I can help it.”

This trip is only my 1871 however. I hope to see more of what Morris saw in this place, and I mean to come again if I can help it. To come for an 1873, and maybe even for that third trip that he never needed or couldn't manage.