A Drunken Promise to Tennyson

William Morris's friend, William Allingham, was an Irish man of letters with a penchant for collecting famous friends. He was also a devoted keeper of diaries. As a result, his unfinished autobiography, "William Allingham, a Diary" is an amazing resource, sprinkled with tales of Morris, Rossetti, Carlyle, and Tennyson.

This is one of my favorite stories from the diary, a re-telling of a story that Tennyson had told Allingham:


I was at an hotel in Covent Garden, and went out one morning for a walk in the Piazza. A man met me, tolerably well-dressed but battered-looking. I never saw him before that I know of. He pulled off his hat and said, “Beg pardon, Mr. Tennyson, might I say a word to you?” I stopped. “I've been drunk for three days and I want to make a solemn promise to you, Mr Tennyson, that I won't do so any more.” I said that was a good resolve, and I hoped he would keep it. He said, “I promise you I will, Mr. Tennyson,” and added, “Might I shake your hand?” I shook hands with him, and he thanked me and went on his way.”

Posted by Clara Finley at 6:32 AM No comments:

One Good Thing to Come out of America

This year, The Delaware Art Museum turns 100. Their excellent collection of Pre-Raphaelite art didn't join the museum until 1935, so the only works to fully celebrate the centennial this year are about a hundred pieces by a single artist: Howard Pyle. Pyle was an American illustrator, artist and author. His art formed the heart of the new “Wilmington Society of the Fine Arts” collection in 1912, after his grieving friends and students banded together to create an institution in his memory.

His illustrations for magazines and books were very well known in his lifetime, drawing praise from American and European artists alike. Vincent Van Gogh was especially taken with his drawings of an old-time Quaker village in Harper's Magazine in 1881, which he thought “astounding”.

Pyle is perhaps best known for his collection of tales, “The Merry Adventures of Robin Hood”, which was published in 1883. Although the story of Robin Hood dates from the medieval period, and had been partially treated by the famous author Sir Walter Scott, Pyle's book was entirely devoted to the outlaw, one of the earliest books to do so in a popular fashion. It was a hit.*

The book even reached England, and found its way into the discerning hands of William Morris. It was right up Morris's street, and not just because of its sympathetic treatment of the tales. Pyle had carefully designed the whole book, which included flourishes of medieval manuscript motifs and sixty-one of this own illustrations. According to art critic Joseph Pennell, Morris had “thought up to that time [that] … nothing good artistically could come out of America." Pyle's beautiful, Romantic book changed Morris's opinion: he was “impressed greatly”.

So when I say Happy 100th birthday to the Delaware Art Museum, I mean to say happy birthday as well to the seed of its collection: Pyle's swashbuckling, adventuresome illustrations and paintings.

*No such luck for many others, including John B. Marsh's version from 1865.

Posted by Clara Finley at 8:56 AM No comments:

In honor of Ray Bradbury, who passed away on Tuesday night at the age of 91, I thought I'd share a clip from his Paris Review interview from 2010:

“That’s what we have to do for everyone, give the gift of life with our books. Say to a girl or boy at age ten, Hey, life is fun! Grow tall! I’ve talked to more biochemists and more astronomers and technologists in various fields, who, when they were ten years old, fell in love with John Carter and Tarzan and decided to become something romantic. Burroughs put us on the moon. All the technologists read Burroughs. I was once at Caltech with a whole bunch of scientists and they all admitted it. Two leading astronomers—one from Cornell, the other from Caltech—came out and said, Yeah, that’s why we became astronomers. We wanted to see Mars more closely.

I find this in most fields. The need for romance is constant, and again, it’s pooh-poohed by intellectuals. As a result they’re going to stunt their kids. You can’t kill a dream. Social obligation has to come from living with some sense of style, high adventure, and romance.”

Morris would have agreed heartily. As a boy, he learned the romance of life from Sir Walter Scott's novels like Ivanhoe and Waverley. That excitement and love of the world drove him to become a Socialist and an activist, and to beautify his surroundings with his design firm. It also drove him to write his own fantastical stories, inspiring younger writers like J.R.R. Tolkien.

The gift continues to be passed down in an unbroken chain. Bradbury is a part of this, which means that he achieved one of his most ambitious goals: when he was twelve, he decided that he would never die. In a very important sense, he hasn't.
Posted by Clara Finley at 8:00 AM No comments: 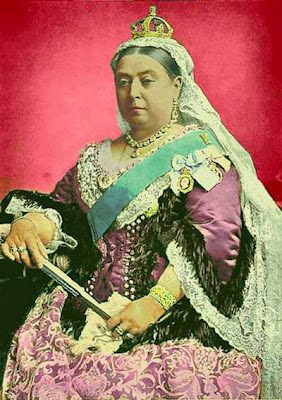 “I am sorry poor old Tennyson thought himself bound to write an ode on our fat Vic’s Jubilee: have you seen it? It is like Martin Tupper for all the world.” *

By the time of Queen Victoria's Golden Jubilee in 1887, William Morris was an ardent Socialist, and he clearly wasn't that keen on what the Queen represented. To mock her and the whole establishment of the monarchy, he had a collection of colorful nicknames for her. He called her “fat Vic” for obvious reasons; “Widow Guelph”, which drew on an old name from her family, transforming her into an ordinary widow rather than a royal; and “Empress Brown”, which saucily played on her close friendship with her servant, John Brown, after she'd become Empress of India.

Morris died the year before Fat Vic's diamond jubilee, but had he lived to see it, he wouldn't have liked it one bit.

* For the quotation, see p39 of this article.

Posted by Clara Finley at 3:59 AM No comments: